There were way too many developments in the past month, at least half of which probably deserved their own post.

Wounding induced hair growth has been in the news a lot over the past several years.

At the end of 2013, I first discussed Dr. Krzysztof Kobielak and Dr. Eve Kandyba from USC in relation to their work on how the Wnt7 gene activates hair growth. Fast forward to this month, and both scientists are back in the news and (via a collaboration with researchers from UC San Diego and from India) published an important paper titled: “Stimulation of hair follicle stem cell proliferation through an IL-1 dependent activation of γδT-cells“.

Interestingly, one of the three most important words used throughout the paper and of primary importance to us (“wounding” or “wound“) is missing from the above title, although not from the complementing photo (see red area in the image further below).

These scientists found that wounding triggers interleukin-1 (IL-1), which in turn activates certain immune cells (called γδT-cells or gamma delta cells). These immune cells then awaken resting stem cells in the hair follicle so that they can then “multiply and travel to the wound site to repair the injury”. For our purposes, the hair follicle stem cell activation is more important than any kind of wound repair (i.e., hair > scar improvement).

Commentator “Omg” who has posted some great material in recent weeks (including the above — thanks) wrote that this finding is the biggest discovery of the past decade. I am not so sure. Note that the authors of this latest work are not affiliated with Follica (the widely discussed company that is developing a “wounding + favorable compound injection” related procedure to regrow hair); nor are they affiliated with Dr. Rachita Dhurat, who has published several groundbreaking papers related to wounding and hair growth. Makes this discovery from an entirely different group all the more exciting, and further validates the potential of wounding spurred hair regrowth. 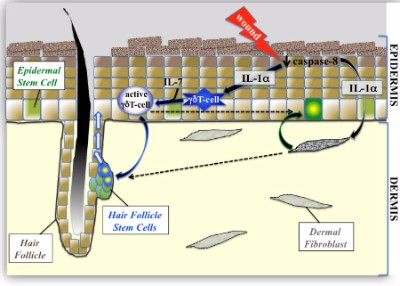 In 2015 I interviewed Dr. Malcolm Xing from Canada. In 2016, I discussed the same doctor’s new findings related to a novel improved “hanging drop” 3D cell culturing technique for the purpose of hair growth. Dr. Xing has constantly been trying to improve upon the renowned Dr. Colin Jahoda’s work.

This month, Dr. Xing and a team from China have published a new paper titled “Bottom-up Nanoencapsulation from Single Cells to Tunable and Scalable Cellular Spheroids for Hair Follicle Regeneration“.

I am not motivated enough to try to make the sci-hub site work to gain free access to this whole paper. I am, however, in no doubt that any new development related to 3D spheroids and hair culturing is of utmost importance and warrants coverage on this blog.

In November, I discovered an interview in which Aclaris Therapeutics’ chief scientific officer mentioned that in the  first half of 2018, Aclaris planned to commence phase 2 trials to treat androgenetic alopecia (male pattern hair loss) with topical JAK inhibitors. This was a huge development, since we are used to virtually all companies in the hair loss world postponing or delaying clinical trials. In contrast, Aclaris is doing the opposite and moving to phase 2 trials without even having done phase 1 trials! They probably got to skip phase 1 trials because they have tested the same JAK inhibitors (including oral and topical versions) for other conditions.

Several weeks after I posted the above pleasing development, Aclaris announced at an investor conference that they would start the above trials at the end of the first quarter of next year (i.e, end of March 2018). Yet again they surprise us with their speed, and do not want to wait will June 2018. The announcement can be accessed by going to their website and finding their latest investor conference presentations (often available in both audio and slide formats).

Thanks to “Royaume” who listened to the whole audio for us (albeit misinterpreted its favorable implication). Commentator “Malcolm” even felt like I should have devoted a whole post to this news, but I did not want to do so less than a month after my prior post on Aclaris. Moreover, past experiences make me think that Aclaris will delay its trial commencement target dates (like all other companies seem to do), although I hope I am wrong.

Replicel’s CEO was interviewed by “Investing News” towards the end of last month. Key quote:

“There’s a possibility… that [our] hair products could have an early launch in Japan. Our partner Shiseido is funding a clinical trial in Japan that’s expected to release clinical data next year. It’s entirely up to Shiseido what they do in regards to this product. There’s certainly a possibility that they could decide if the data is positive, to launch the product in Japan and that would trigger… milestone payments and sales royalty revenue”.

Other Items of Interest

— I saw a number of comments and received several e-mails regarding the Brotzu lotion. It seems like they updated their EU patent page and several Italian hair loss forum members are claiming that the product is coming out in early 2018. For the time being I will refrain from writing a post on this, as it seems like there is a lot of speculation going on.

— A great thread with before and after photos on Reddit about the power of  the “Big 3” treatment of Finasteride plus Minoxidil plus Nizoral when effective.

— PolarityTE starts using its SkinTE product on humans. No info yet on potential hair growth effects on the scalp, but still great to see usage in humans rather than mice so early in the process. Key quote:

“We are confident and believe that SkinTE will replicate its preclinical success and help patients regenerate their own full-thickness, hair-bearing skin”.

Since the last “brief items of interest” post a month ago, there have been numerous important developments in the hair loss world. Some involve renowned researchers that have already been covered a few times on this blog before.

— Meiji Seika Pharma (Japan) and Dr. Takashi Tsuji, head of the Laboratory for Organ Regeneration at the Riken Center for Developmental Biology (Japan), have entered into an important partnership.  Their goal is “to develop treatments to regrow lost hair.”  Apparently 12 million adult men in Japan suffer from hair loss. The partnership will focus on regenerative medicine rather than on any kind of drug development.  Japan’s new laws will also help speed up clinical trials in the regenerative medicine sector.

— Also in Japan, a new article on Shiseido mostly covers things we already know and confirms that they will start trials this year. However, the ending is of interest: “The fee to receive the treatment will be at least 100,000 yen ($887).”  A lot cheaper than I expected.

— I have covered Dr. Colin Jahoda and his 3D spheroid culturing of dermal papilla cells on this blog before.  Mr. Jahoda has been a legend in the hair loss research world since the 1980s, but it seems like he may have reached the end of his best years in terms of research.  Thankfully, the Chinese are continuing from where he left off.  A team from Southern Medical University (China) and Dr. Malcolm Xing from Canada have published an interesting update on their work with 3D spheroids.  It seems like they have improved somewhat on Dr. Jahoda’s work with a novel hanging-drop method. I am glad that they are continuing this area of crucial research.  Note that Dr. Xing gave Dr. Jahoda a good deal of credit when I interviewed the former.

— Another renowned researcher that I have covered before, Dr. Elaine Fuchs, just published an important article summarizing how stem cells get activated to produce new hair.  Forkhead box C1 (FOXC1) is a key transcriptional regulator of hair follicle stem cell activity and bulge maintenance.  Also see another summary of the same study.  One of the interesting conclusions of the article seems to imply that premature hair loss is also correlated with premature hair greying.  Something I have noticed in many people.  “Hair follicle stem cells influence the behavior of melanocyte stem cells, which co-inhabit the bulge niche,” explains Fuchs. “Thus, when the numbers of hair follicle stem cells declined with age, so too did the numbers of melanocyte stem cells, resulting in premature greying of whatever hairs were left.”

— Tiny Singapore might have a stagnant and small population, but they still care about hair loss.  Their scientists (plus others from Stanford) recently published a paper covering the gene Axin2 and autocrine Wnt/β-catenin signaling.  Complicated stuff to understand for a non-scientist such as myself.

— A new cream based hair loss treatment from Yeditepe University called Kelopesia was just announced out of the blue. Their presentation is amateurish, and as soon as I hear the words “stem cells” along with “hair” these days my scam radar turns on unless the company or institution has been involved in the hair loss research field for many years.  Anyway, these guys are using foreskins for this treatment. Product will supposedly be released in a month.  If it was not a university, I would say a 100 percent certainty this is a scam.  I still feel that this is going to be a major disappointment.

— Antonio Conte’s hair transplant seems to have turned out to be pretty good.

— Christopher1’s experience with Kerastem thread worth following. Under my last post someone posted a comment that the treatment did not work and costs a lot.

— At least once a year, we in the US get to read a story about a major Rogaine theft.  Invariably, the thief is bald and this is emphasized by the media.  I suspect all of these bald Rogaine thieves are selling most of the stolen cans rather than using their contents on their own scalps.

I will shorten this section for this month since the hair loss one was so lengthy.

— An interesting recent video discussion between Dr. Aubrey de Grey, Dr. Bil Andrews and Elizabeth (Liz) Parrish. All three of whom I have covered on this blog before.

— Another recent one with just Dr. Bill Andrews.

— How long until we can print human faces in the lab?