This is a lengthy and at times disjointed post, but well worth reading in its entirety.

Over the years, perhaps the most intriguing question in the online hair loss world has been whether totally bald areas of the scalp (i.e., sections that have probably been devoid of any terminal hair for at least a decade) can regrow that long-lost hair.  Historically, the answer to this question was a bit discouraging, although no-one was ever entirely sure…since for decades there have always been proven cases of some people who regrew some of their long-lost hair.

The one encouraging factor has always been that even totally bald areas of the scalp still seem to have all the hair follicles on there, but they are just way too miniaturized to be easily seen with the naked eye even at close-up. The one discouraging factor has been that progenitor cells in balding areas seem to be depleted.

Having seen 100s of before and after Finasteride and Minoxidil online photos during the past dozen or so years, I rarely ever saw any truly spectacular results that clearly showed a totally bald man regrowing healthy robust hair.  To me, even most of the excellent before and after photos seemed to suggest that the hair that was regrowing was probably lost in the past few years (since the photos typically involved younger people or those with limited hair loss in the before photos).  In the rare event that long-lost hair is regrowing from these drugs, the new hair tends to be very thin and short, offering sparse coverage.  It is still worth your time in checking out before and after Finasteride and/or Minoxidil patient photos.

When Dutasteride first came out in 2002, there was a level of excitement in the online hair loss forums that was never before witnessed and that has probably never since been witnessed.  I know, because I have followed the online hair loss forums for around 15 years, with only brief breaks during that time when I was busy with less interesting things in my life.  In the early 2000s, a doctor by the name of Marty Sawaya claimed that her elderly test patient Dr. Monahan regrew hair that had been lost for decades (if I recall, she even had a stunning before and after photo as proof).  In any event, it has now been over a decade since Dutasteride came out, and tens of thousands of people have tried the drug to treat androgenetic alopecia.  Results have generally been superior to that of Finasteride, but very few people have seen significant quantity and quality of regrowth of long-lost hair.  It is nevertheless worth reading some of the before and after Dutasteride testimonials on this site, as many are extremely encouraging for those who have not lost too much of their hair yet or have only been losing their hair for five or so years.

Moreover, on various drug review websites, a number of very old patients who take the drug (Avodart) for BPH have also posted that they sometimes regrew hair that had been gone for many decades.  I do not think that any of these older gentlemen ever came close to regrowing their childhood hairline.  Nevertheless, I have seen enough testimonials from older people to suggest that regrowing some long-lost hair is possible with Dutasteride.

I have covered male-to-female (MTF) transsexuals a few times on this blog.  The ones who transition at a later age after having lost much of their scalp hair are an especially fascinating subject for me. Unfortunately, once men have lost hair for many years, even castration PLUS estrogen supplementation PLUS Spironolactone during the conversion process to becoming female is insufficient to regrow any significant quantity of long gone hair.  (FYI — although it seems like she was not castrated, I highly recommend reading about the famous hair loss forum member and MTF transsexual Danielle Hallett).

This phenomenon is a bit discouraging for me.  If even men who remove their testicles (which are 100 percent responsible for male pattern hair loss) cannot usually regrow long-lost scalp hair (at least not to original density and thickness levels), we are in trouble.  FYI: removing your testicles will completely halt any further hair loss and will sometime even regrow hair that has been lost in recent years. 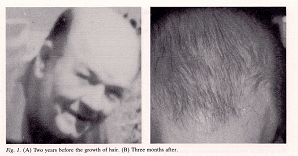 PRP does not Regrow Long-Lost Hair

There has been a lot of hoopla over platelet-rich plasma (PRP) treatments regrowing scalp hair in recent years.  However, my feeling is that there is no way that PRP will grow hair on totally bald regions of the scalp.  In fact, there is not even yet any sufficiently reliable evidence that PRP can regrow hair that was lost just 1-2 years ago.  At best, PRP seems to make existing hair stronger and perhaps reverse very recent miniaturization of follicles.  Even several doctors who offer PRP have told me an approximate version of this story.  It should be noted that most doctors who offer PRP do seem to believe that it offers at least modest benefits to the majority of treated patients’ scalp hair.

Reduction in Progenitor Cells but not in Hair Stem Cells — Good News?

In 2011, a famous study came out that concluded that totally bald scalps do not have fewer hair follicle stem cells, but rather, fewer  specialized progenitor cells.  The authors concluded that “understanding the signals responsible for transition of stem cells to progenitor and more differentiated cells will be the next step in developing new treatments for skin disorders.”

Although upon initial examination this seems like good news, it would only be so if scientists can figure out how to increase the progenitor cell population, ideally without any kind of new cell injections.  Many hair loss forum members think that this can already be done, but I am not so sure and have not tried to do much research into this.  Update: In a comment to this post, Nic said the following: “You can increase your progenitor cells by using Stemoxydine, LiCL after rolling or topical VPA. I’m personally using Stemox and LiCL and it works!”  No idea about this, but sounds interesting.

Until 2013, the numerous publicly viewable online before and after Dutasteride results and before and after MTF transsexual results were proof enough for me that any scalp hair lost over 5-10 years ago was highly unlikely to ever grow back, especially not in terms of roust length and thickness.  I thought that perhaps long-lost hair can never be regrown and the only hope is to wait till hair cloning or hair multiplication materialize?  Then my thinking changed in 2014.  I discovered older neglected reports of miraculous hair regrowth on totally bald scalps (see below). Moreover,  this new information was further bolstered by all the recent hysteria surrounding JAK inhibitors (which have cured alopecia areata in many people) potentially working on androgenetic alopecia patients too.

I have frequently read about how wounding could regrow long-lost hair and even wrote a post on dermarolling in 2013.  However, the results of this self-injury are far from convincing, perhaps hindered by the fact that the injury has to occur in a very specific and well defined manner (also see my somewhat related post on Quorum Sensing).  Then last year I discovered a case study in which the authors discussed an old man who burnt his scalp badly and thereafter regrew a lot of hair in the burnt region that had been devoid of hair for decades! Below is the article and photo pasted from here: 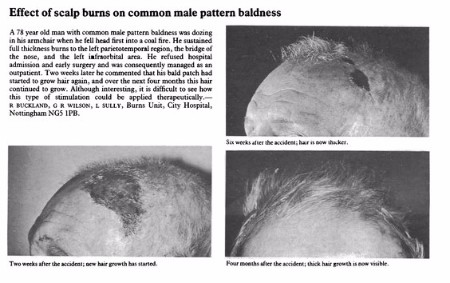 A 2018 report from China proved wound induced hair follicle neogenesis. An 80-year-old patient had a large wound on the scalp after excision of a basal cell carcinoma. This patient’s wound healed very well aesthetically. Surprisingly, 180 days after the initial wound, a single hair was observed to be growing from the center of the wound. The hair remained black at 42-month follow-up. A company named Follica is working on wound induced hair follicle regrowth.

However, the strange thing is that as far back as 1982 an article was published that discussed how an anti-inflammatory drug called Benaxoprofen regrew hair in a 75 year old patient who had been suffering from androgenic alopecia for 30 years.  I covered this highly important issue in a post last year.  There were no before and after photos of this patient, but the article appeared in the prestigious British Medical Journal and seems believable.

Unfortunately, Benoxaprofen was later banned in the US due to major side effects:-(

— “COX-2 has a key function in the prostaglandins pathway, converting AA (arachidonic acid) to PGH2, from which PGD2, PGE2, PGF2α, prostacyclin and thromboxane A2 are produced by specific synthase enzymes. Recent publications demonstrate that PGs are implicated in hair growth regulation.”

Of course we all know a lot about JAK inhibitors these days.  Will they work on male pattern baldness too?  I rated the chances at 5/10 in my recent very popular post on this subject (Update: also see my posts in June 2016 regarding Alcaris Therapeutics).  Based on the earlier mentioned experiences with Benaxoprofen, I am optimistic that at least some people will see hair that has been gone for decades regrow when taking these JAK inhibitors.  It remains to be seen if the topical formulations of these drugs get faster FDA approval in the next few years because of the oral versions already having been approved.

Note: Also see this interesting patent from 2014 where there is a lot of discussion about JAK inhibitors and their potential positive impact on alopecia areata, androgenetic alopecia as well as skin generation.

Hair Growth-Stimulating Effects of Cyclosporin A and FK506, Potent Immunosuppressants

A study from all the way back in 1994 found that Cyclosporin A (CsA) and FK506 (both of which suppress the immune system) led hair regrowth.  Key quote:

“The hair growth stimulating effect of CsA is observed not only in normal but also in pathological conditions of hair growth, i.e. in patients with alopecia areata and also in some patients with male-pattern alopecia.  Although hypertrichosis is induced by both topical and oral administration of CsA, there has been no report showing that FK506 induces hypertrichosis.  Recently we have found that topical application of FK506 to skins of mice, rats and hamsters markedly stimulates hair growth.  This hair growth stimulating effect of FK506 is observed when applied topically, but not by oral administration, even with a dose which causes marked immunosuppression.”

Very interesting, since the previously mentioned recent news from 2014-2015 suggests that topical JAK inhibitors might help patients with androgenetic alopecia, but oral ones will almost certainly not.