This post will include numerous dutasteride reviews and ratings from blog readers. Make sure to read all the comments from people who have used dutasteride (Avodart) to treat their hair loss. 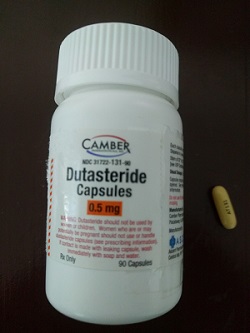 I have written about Dutasteride (brand name Avodart) many times before on this blog. This drug was first approved by the FDA in 2002 to treat benign prostatic hyperplasia (enlarged prostates).

Dutasteride has not yet been officially approved to treat hair loss in the US or EU. However, it was approved for that purpose in South Korea in 2010 and in Japan in 2015).

Update: the US and EU were still holding off as of year-end 2019. It also seems GlaxoSmithKline does not want to go through the approval process any more. They did do some clinical trials on Dutasteride and androgenetic alopecia. The results were published in 2018 and deemed a success.

In any event, the approval in South Korea an d Japan is still a huge development. To date, only two drugs (Minoxidil in 1988 and Finasteride in 1997) have ever been approved by the US FDA for treating hair loss. It has been over 20 years since the last approval of a drug to treat hair loss!

Based on many existing studies as well as anecdotal forum evidence, it is virtually guaranteed that Dutasteride will result in superior hair growth/regrowth in comparison to Finasteride. But the former will also result in higher rates of side effects compared to the latter. However, these higher rates of side effects are unlikely to be drastic enough for the FDA to deny GlaxoSmithKline (GSK) permission to market Dutasteride for hair loss.

One 2013 article that reviewed numerous recent Finasteride and Dutasteride related studies suggests a 5-9 percent chance of erectile dysfunction. In most cases, such side effects are not permanent, although some people have seen permanent problems even after complete cessation of drug ingestion.

The big question is whether GSK will deem it worthwhile to produce and market Dutasteride for hair loss after analyzing potential revenue prospects. And they will also have to consider potential losses based on recent lawsuits against Merck regarding Propecia (Finasteride) side effects. Dutasteride will definitely have more people complaining of side effects in comparison to Finasteride.

In the meantime, rather than wait for the FDA and GSK to make their moves, I have decided to write this post in which I hope to see comments from people who have tried to use Avodart to treat hair loss. Success and failure testimonials are both welcome.

By now, there must surely be well over 100,000 men around the world who have used Avodart off-label to try to regrow hair. When the drug was first approved in 2002 to treat enlarged prostates, people on online hair loss forums went berserk with excitement and were more than willing to try using it to regrow hair.

I hope to see many testimonials and comments to this post in the coming years. I will try to only allow specific comments and concerns related to the drug itself. Such as side effects, cost (including the cost of generic dutasteride), dosage and so forth.

I hope that this post, due to the helpful dutasteride for hair loss reviews from you readers, ends up becoming extremely useful. On hair loss forums, Avodart/Dutasteride related testimonials are usually either not broken out in a separate subcategory, or are not updated regularly.

It should also be noted that older men who have taken Avodart to treat their enlarge prostates have sometimes noticed some hair regrowth in areas of their scalps that have been totally barren for many decades. You can read some of these testimonials in several of the below links.

Regrowing hair in totally bald regions of the scalp is extremely difficult and akin to a miracle with weak existing treatments. Even when highly effective, current hair loss treatments only maintain hair and, at best, regrow only recently lost hair.

Note: Dutasteride is not meant to be used by women who are planning to get pregnant.