At the recent 76th annual meeting of SID I noticed an interesting presentation titled “Olfactory receptor stimulation promotes human hair growth“, with the lead author being a Dr. Jérémy Chéret who I had never heard of before. One of the co-authors, however, was the well known Dr. Ralf Paus, who I have covered on this blog several times in the past.

While (unsuccessfully) trying to find a full version of the above paper, I stumbled upon the website of a new company that Dr. Paus has started in Germany called Monasterium Laboratory Skin & Hair Research Solutions. Although the company was supposedly started in 2015, it seems like their website only came on-stream in 2016.

On the website, they have a blurry image of the earlier mentioned study on the olfactory receptor (specifically, the OR2AT4 receptor) in one of the rotating banners on top. Apparently the company even released a product in Italy in 2017 called Bioscalin Signal Revolution and it supposedly stimulates the OR2AT4 receptor. If any of you readers frequent the major Italian hair loss forums out there, I would be curious as to what they think about this product.

Another interesting study that the Monasterium team has published recently concludes that the antidepressant Fluoxetine (Prozac) promotes human hair follicle pigmentation and could prevent grey hair formation. This is interesting and surprising, because there have also been some reports that SSRIs such as Prozac can cause hair loss in some patients.

According to Monasterium Lab’s news page, they will be moving into a brand new research facility in 2018 (located in this modern nanobiotech research hub): 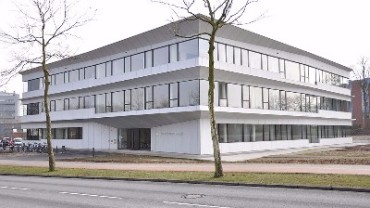 During the course of my research for this post, I read this wikipedia entry on Dr. Paus’ wife (with parts of it also involving Dr. Paus), and there seems to be some controversy regarding their past work. Nevertheless, this does not seem to have prevented Monasterium Laboratory from having a pretty solid list of advisers as well as collaboration partners (they list Shiseido as one of those, at the bottom of this page).

I have my doubts about this one, but nevertheless a very interesting new development. The US, Japan and Germany seem to be leading global hair loss research, although Germany has been lagging the other two so I am glad about this new addition in that country.