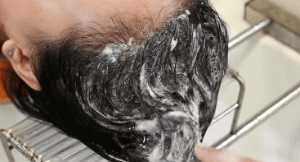 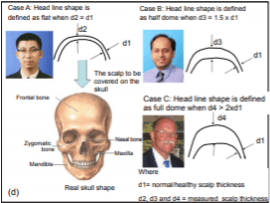 Update: A study from January 2020 concluded that androgenetic alopecia is associated with increased scalp hardness.

Over the years, I have read a number of articles and studies that discussed how balding men’s scalps are tighter and thinner than scalps of non-balding men. In tandem with fibrosis, this leads to permanent hair loss once the male hormones have started the damage.

Even in 1954, there were already theories that perhaps fat loss on the scalp was to blame for hair loss. Maybe dihydrotestosterone (DHT) spurred androgenetic alopcia affected some people more than others? Depending on how susceptible individual scalps were to losing fat layers and fat cells. Even further back, in 1942, Dr. Frederick Hoelzel postulated a baldness and calcification of the ivory dome theory.

Another old study from 1972 concluded that in advanced stages of baldness, all skin layers of the scalp other than the galea exhibit significant thinning. Fibrosis, calcification and increased scalp tension are all part and parcel of male pattern hair loss.

I have covered the issue of fat cells and hair growth numerous times on this blog in the past. Kerastem is perhaps the most important company in relation to this area of hair loss treatment. Stromal vascular fraction (SVF) enhanced adipose transplantation is the more technical name of this method of trying to regrow hair.

Also make sure to read my posts on adipose derived stem cells (ADSC) and hair growth; and the related AAPE for hair growth. Sooner or later, I think that these technologies will become better and more reliable. They will probably never regrow hair on completely bald regions of the scalp. However, anything that can permanently maintain and strengthen existing hair is a huge success.

After I wrote my last post on Botox and hair growth, I received an interesting email from a surgeon named “Gabriel P”. I am pasting it verbatim below, and hope to hear back from him in the next few months.

“I wanted to share with you my story as a surgeon with hair loss maybe it could help our community.

Ok Hear me out.

Preface: Been losing hair for a number of years 10+. I am now 32 years old. I even went through a few hair transplants utilizing body hair and beard hair. I’m a surgeon myself so I tried everything I could in terms of medical literature defined what could help me with my hair loss. I didn’t want to try Propecia because of side effects and I like my sex life. So here’s what I’ve tried that has only marginally helped.

That is about it. I’ve had this theory for a while now. With scalp hair loss and decreased blood flow.In a type lower extremity surgery I do, we bring blood flow to the legs utilizing an angio. The leg skin then goes from thin and shiny and no hair growth, to more malleable and better quality thicker skin.

If you look at patients with peripheral vascular disease, their skin on the legs will be very thin shiny and there will be almost no hair growth in the foot and ankle area.

The same goes for the balding scalp; most bald men in the Galea Aponeurosis area have thin and shiny skin and you can almost see the demarcation. people who aren’t bald don’t have this phenomenon on their scalps.

I thought to myself- “Why is it that my scalp itching started when my skin started getting shiny, thin and super tight- and why is it that when my blood pressure goes up my hair feels better? Or why my scalp itch goes away after a good nights rest when I’m in supine position, only to return during the day?”

The frontalis, temporal and occipital muscles all pull at the scalp and galea from different directions. We’ve had DHT pumping in our blood since puberty but my hair loss didn’t start then so whats the deal? I believe that as this skin gets tighter fibrosis occurs and the hair starts to miniaturize because the DHT or whatever it might be is not able to be washed out. This is only one factor, but I think its a key factor to fighting hair loss.

Back to botox: Botulinum toxin prevents muscle contraction for a very long time. To my knowledge there is only one study that studied the effectiveness of botox on the scalp- here it is:

Relatively small study, with good results. Apparently women have been using botox to keep their hair straight, but what I wanted to do was inject in the areas of the muscle tendon attachments to see if I can restore blood flow to the area as a result of loosening the scalp and the galea apopneurosis.

So I did. I have a plastic surgeon who I work with who I punted this idea to and we injected my scalp with botox loosely following the protocol in the paper. I wont go into the details, but its been a week so far and my scalp itch is COMPLETELY GONE. I cannot emphasize how this is NOT placebo and something definitely changed.

Whether it will last I will keep you updated. So far my scalp itch is gone and shedding has gone down a bit, but no regrowth bc its too soon for that. My hair feels significantly less limp as well. Botox lasts around 3 months so this should feel good for about the same time. I doubt I will get regrowth, but if I can keep what I have, its a win.”