Poietis is a relatively small 25-employee France based company that is active in the 3D and 4D laser bioprinting  sector. The company only commenced operations in 2014 and its main current focus is in skin tissue laser-assisted bioprinting for regenerative medicine applications. Moreover, the printed tissues can also be used in preclinical research applications as well as in evaluating the efficacy of various cosmetic products.

While there are numerous companies active in the tissue bioprinting sector, Poietis is unique in its use of lasers to build the tissue. Other companies typically use an extrusion process in which bio-ink is pushed through a nozzle.

Partnerships with L’Oréal and BASF

I first briefly covered Poietis on this blog in 2016 after the formation of their partnership with French cosmetics behemoth L’Oréal in order to 3D bioprint hair follicles. At the time, this was major news and was even covered by the BBC. Below is an image from a recent 2017 presentation on 3D printed hair by Poietis’ CEO Mr. Fabien Guillemot. The image was taken from L’Oréal’s Twitter account, which is a good sign that both partners are still pursuing the hair printing angle. 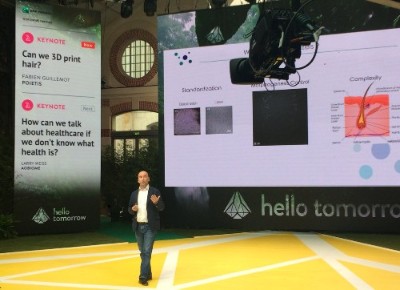 Note that L’Oréal is also involved in a 3D printed skin tissue partnership with Organovo that I have covered on this blog in the past. And late last year, L’Oréal entered into a collaborative agreement with famous hair regeneration company Samumed in order to help develop the latter’s anti-wrinkle skin care topical product (h/t Mutruk). And of course L’Oréal is working on a cure for grey hair too. 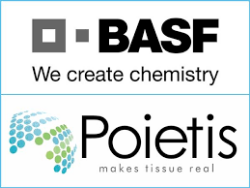 The goal of this partnership is to further improve upon the 3D laser-assisted bioprinted skin models that the companies have co-developed since 2015. These models will aid in evaluating cosmetic ingredients for skin care applications as well as possibly lead to an end in animal testing.

This week, commentator “sets” made me aware that Poietis has started the new year with a big announcement. Several days ago, the the company announced that it had now launched its Poieskin® laser-assisted bioprinted skin model. Sales will officially start in April 2018. More here. Poietis plans to significantly increase its employee total this year, and hopefully the company will have more to say about hair before the end of the year.

Within the world of 3D printing, by far the most exciting developments to look forward to are those involving 3D printing of human body parts (more accurately known as 3D bioprinting).  Even after reading about this for a few years now and watching many videos on the subject, it still seems like science fiction to me. However, this is definitely not fiction, and the basic technology has already existed and been used in people for over a decade.  Dr. Anthony Atala (a pioneer in this field who I have mentioned a few times on this blog before) has two extremely popular TED Talk videos on this subject from 2010 and 2011  that you can view if you scroll to the bottom of this page.  Dr. Atala’s work was also well covered in this article from just a few months ago.

Much of the work entailing 3D printing of organs thus far involves a combination of printing cells plus biomaterials.  When it comes to 3D printing of hair follicles, all the work thus far seems to focus on the use of synthetic materials rather than actual cells, although I am not certain about this biology behind this. We are still not close to being able to implant such 3D printed hair into the scalp as far as I can tell.  Nevertheless, this subject is still fascinating.  Here is a video from last last year on this subject along with this article that I posted on this blog before.  In the past several months, two news items on 3D printed hair caught my eye.

The first of these was not widely covered, but since it involves researchers from MIT, I give it precedence.  These scientists are part of the MIT Tangible Media Group, led by Dr. Hiroshi Ishii, and their project is called Cillia.  Note that they do not discuss the human scalp whatsoever, and they are using bitmap technology to print this hair rather than any kind of actual cells.  For the scientists among you, Dr. Ishii and his team’s paper on this subject is probably extremely interesting.  I only glanced through it due to time constraints.

The futurism website has a much more detailed article on the subject, although I laughed when I read this quote:

“While there are a number of potential aesthetic purposes, customized paint brushes or strong adhesive surfaces might be at the top of people’s lists on what 3D printed hair could be used for.”

I would guess the exact opposite.  The aesthetic purposes will be far more important from a commercial perspective.  Or maybe I am just underestimating the market for paint brushes and adhesive surfaces?

Italian company Cesare Ragazzi Laboratories has received tremendous publicity over the past several months, even thought its technology was already shown in a 2014 video on the company’s youtube channel:

Perhaps they have since improved upon their methodology even further?  In any case, here is a NY Daily News article from March where I first read about the company.  Their work was even covered on 3dprint.com earlier this year.  The company’s technology is essentially an attempt at making a much better wig/hairpiece/hair system/toupee than anything that is in existence today, with far less expensive and less frequent maintenance requirements, plus a better individualized fit (scalp mapping).  The technology is based on CNC systems that are being sold around the world by Cesare Ragazzi.