A new study from India shows that Dutasteride 0.5 mg once a day increased hair count in 45 men from 223 at baseline to 246 at 24 weeks (i.e. in 5.5 months of treatment). Full highly detailed study here. This represents just over a 10 percent increase. It should be noted that without any treatment, most people would continue to lose hair, so the real benefit is greater than 10 percent.

Before and after photo of best case result of Indian patient taking Dutasteride 0.5mg daily for 24 weeks (Source): 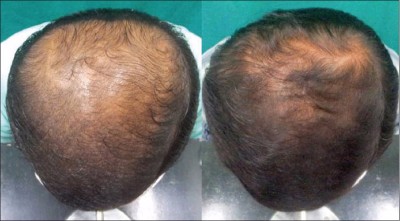 This is yet one more study among numerous others over the past decade that has concluded Dutasteride to be significantly superior to Finasteride in regrowing hair. The majority of such studies seem to come from the western world (with Japan and South Korea also disproportionately represented) so I am glad that this one comes from India. It seems like Dutasteride is effective at growing hair irrespective of one’s ethnicity and genetics.

I liked the below finding (although it should be noted that Dutasteride is still too recent a drug to make any conclusions about long-term side effects; and most other studies show at least slightly higher side effects from Dutasteride compared to Finasteride):

Both the groups showed a similar side effect profile with sexual dysfunction being the most common and reversible side effect.

Over the years, I have read many online anecdotal reports (see links at end of this Dutasteride reviews for hair loss post) of older men who were taking Dutasteride to treat enlarged prostates and saw hair growth in areas of the scalp that were totally bald (i.e., covered in vellus hair) for decades. Dutasteride likely helps bring back long-lost hair in many patients, although usually just some of it.

***If you ever do decide to take Dutasteride, I would highly recommend consulting an experienced dermatologist first and being aware of the worst case potential side effects.