Before continuing, make sure to read the almost 400 comments in the Avodart and Dutasteride for hair loss reviews page. Also note that as of 2019, dutasteride has still only been officially approved to treat hair loss in South Korea and Japan.

In 2016, I published a similar article on the wide range of prices of generic dutasteride depending on brand and store. Nevertheless, even the costliest generic dutasteride is a lot cheaper than Avodart (the original patented brand name dutasteride). Ashton Kutcher prefers the expensive Avodart over cheaper generics.

Generic hair loss drugs such as the above are often 10 or more times cheaper than brand name ones. The positive impact on your savings is especially amplified when it comes to the much more expensive Avodart versus cheaper “generic Avodart” (i.e., dutasteride).

The vast majority of hair loss suffers seem to prefer generics over brand name products. And most of them make their purchases online, often via sketchy offshore based websites.

Not all Generic Dutasteride Versions the Same

For what must be at least 4 years, I have been taking generic dutasteride 0.5 mg once every two days to treat my hair loss. Half the recommended daily frequency in the hopes of reducing the chances of side effects.

It is one of only two medications that I have ever taken for more than a week in my life. Both for hair growth purposes. The other one was generic finasteride, which I took for over 5 years prior to switching.

It took me a while to shift from generic finasteride to generic dutasteride. The latter grows more hair than the former, but has at least modestly higher rates of side effects. I found both phenomena to be true from my experiences during the past four years.

When I first started taking generic dutasteride, I was taking the drug sold by a US based company named Breckenridge Pharmaceutical. The actual product (see photo above) was manufactured by Douglas Manufacturing (New Zealand).

I had superb result with this brand of dutasteride. However, perhaps some of the positive effects could have been due to the fact that the first time you use dutasteride almost always give the best spurt in hair growth. I also got no side effects from the Breckenridge product.

Some of the comments in the earlier linked Avodart and dutasteride reviews post also praised this particular brand. Unfortunately, Costco and Walgreens both stopped offering this Breckenridge brand several years ago.

I then switched to generic dutasteride made by Apotex (Canada/US). The actual product (photo on left) was made by Accuaps (Canada). The Apotex founder, billionaire Barry Sherman, was renowned across Canada. Sadly, him and his wife were murdered in 2017 in what remains an unsolved mystery.

I do not remember much about this product’s positive and negative effects since I only used it for half a year. A short time after I had my prescription filled, both Costco and Walgreens switched to a new brand yet again.

Update: January 2022 — I recently purchased generic Dutasteride using GoodRx (after I did not renew my Costco membership). The price was just $23 for 90 0.5mg pills, and the product was made in China via Epic Pharma (US)’s local contract partner Humanwell Puracap.

This brand seems to cause me forehead acne every month, often leaving scars that last for many months. I never had bad acne before, even during my teenage years. I also think that the hair growth from the Breckenridge brand generic dutasteride was significantly better. Although, again, this could be due to the “first time almost always being the best” when you start a new hair loss drug.

Unfortunately, I also think that this powerful testosterone, estrogen and dihydrotestosterone (DHT) hormone altering drug has made me gain some weight (perhaps 10-15 lbs). And it has likely also caused some gynecomastia (male breast tissue enlargement) as a side effect.

However, this could also at least partly be due to the fact that I am not too far from hitting middle age. I am also less active then I was five years ago. Hard to tell what portion of blame falls on medication; age; and lifestyle.

I think that my prior finasteride usage also caused some gynecomastia and body fat increase. See my related post on finasteride and its impact on testosterone and estrogen.

I am not sure that I can blame any particular version of generic dutasteride for the weight gain. It does seem like the worst of the gyno has happened since I started taking the Camber version, although I am not 100 percent certain. I did not take regular body dimension measurements each time I switched drugs.

Despite the above side effects, I am certain that all versions of generic dutasteride that I have tried have helped me at the very least maintain my existing hair.

Generic Drugs are not Identical to Brand name Originals

Based on my varied experiences using the same product made by different manufacturers, I did some more research on generic drugs. I have become skeptical about the quality of some of these products.

It seems like generics are not entirely identical to brand name originals. And they are also not identical to other generics. They are supposed to have the same active ingredients and be “bioequivalent” per US FDA regulations. However, inactive ingredients can and do differ significantly depending on compounding.

Moreover, even the bioequivalence regulation allows for a 20 percent variance between the generic and original formula. In actuality, the variance is 4 percent, although this is an average. You can only hope that you are not one of the exceptions to the average.

Of more concern, some generics are increasingly made in Israel, India and other countries outside the western world. There is a dark side to this, especially when it comes to oversight in developing countries.

Ultimately, despite the cautious tone of this post, I would say that most generic hair loss drugs are safe and equally as effective as brand name drugs. The only time you should really worry is if you starts getting strange side effects that you never get with prior brands of the same drug.

As always, the best solution is to just shave your head and never take any of these drugs in the first place! I refuse to take the more sensible option and accept the consequences.

Update: There are now various online sources that offer coupons with huge discounts for drugs such as generic Finasteride if you are purchasing them with cash and without any insurance. You need to print the coupon and take it to the pharmacy with your prescription.

In November 2013, US-based Merck’s patent on hair loss drug Propecia (made up of Finasteride 1mg) finally expired. Thereafter, numerous generic versions of Finasteride 1mg have come into the US market at a small fraction of the cost of Propecia. I assume the same is true in other countries and blog readers are free to post their findings in the comments to this post.

Several pharmacists I talked to were uncertain about whether a company made or just packaged these products, but I tried to check my findings online and hopefully there are no errors in the below table.

Most hair transplant surgeons are willing to prescribe generic Finasteride 5mg pills to combat hair loss, even though the 5mg dosage has officially only been approved to treat BPH. Therefore I also decided to add information on generic Finasteride 5mg in the below table.  I have been taking generic 5mg Finasteride pills for years to help my hair, although I take the 1 quarter (1.25 mg) pill every two days rather than daily.  FYI — The half-life of Finasteride is 6 hours.

According to a pharmacist I talked to at Walmart, there are numerous types of discount cards available these days that will get you $50 off a prescription. She said she was not allowed to tell me where to get such cards, but they are easy to find.

Also note that at Walgreens, the 30 generic Finasteride 5mg pills made by Teva Pharmaceutical (Israel) will only cost $10 rather than $84 if you enroll in the Walgreens prescription savings program for $20 per year. Other pharmacies probably also have savings programs.

Note: Prices and brands at the same pharmacy chains may vary by state. Also keep in mind that many stores will price match.

For most people, 30 pills of Proscar will last for 4 months after cutting each pill into 4 pieces and taking 1 daily. For me, it will last for 8 months, so I would rather purchase Proscar at this low price rather than generics.

The generic pills that I currently use are the 5mg ones made by Camber Pharmaceuticals. I hope to send one of the pills to a lab to test and make sure that they are identical to Proscar. A local custom pharmacy that I contacted did not offer such a service. Perhaps I need to go and approach a university’s chemistry lab? 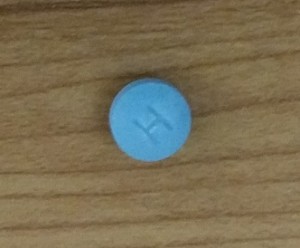