Today is “Be Bald and Be Free Day”. However, most of us refuse to shave it all off and be free. Therefore, every October 14th is no celebratory occasion for us. Singer and entertainer extraordinaire Elton John agrees with this sentiment. Mr. John has never shaved his head, despite going bald decades ago. 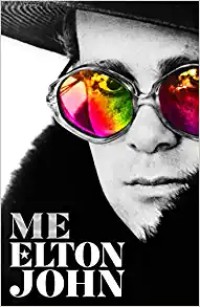 This past week, Sir Elton John CBE (born Reginald Kenneth Dwight) has been all over the news. He has been giving some very reveling interviews due to tomorrow’s release of his autobiography: “Me”.

In his autobiography, Elton John devotes a lot of space to discussion about his bad hair transplants, wigs, hairpieces, hats to hide his scars and more.

Never Let Anyone See you Bald

My favorite anecdote entails how when Elton John thought that his home was being burgled, his first worry concerned his hair. He ran to his bedroom to put his wig back on. If he was going to be killed by the burglars, he wanted to at least be found dead with a full head of fake hair!

One of the most surprising things I discovered is that Elton John had two hair transplants in 1976 in France. However, he was highly dissatisfied with the results. His surgeon was a leading hair transplant expert named Pierre Putot.

With his head covered in “scabs and weird craters”, Elton John wore a hat all the time when in public for the next decade. Modern day hair transplants are usually much safer and superior.

Men with excess body hair tend to go bald more frequently, and Elton John is yet another example of this phenomenon. Above photo is from the 1970s, when hairy chests were highly fashionable.

Elton John is one of the most famous people that is confirmed to be wearing a hairpiece. He initially tried a hair weave in the 1980s.

After being told that it looked like a dead squirrel, he got a hairpiece. He has also worn various hair systems and wigs over the years.

Some celebrities such as John Travolta have removed their hairpiece (or hair system or toupee or weave) once in a while. However, Mr. John has never appeared in public without his hair glued on.

In the past, Elton John has on rare occasions discussed his hair loss issues. In the below video, Mr. John mentions how his head is the incorrect shape for a bald shaved head look to be suitable.