On this blog, I primarily focus on androgenic alopecia, which is also known as male pattern baldness (MPB).  This kind of baldness results from male hormones (in particular, the derivative dihydrotestosterone, aka DHT) and an individual’s scalp hair follicles’ genetic susceptibility to miniaturization when under the influence of DHT.  The vast majority of men who suffer from hair loss are experiencing androgenic alopecia.

Today, it was announced that Yale scientists had cured alopecia universalis on a man via just administering an existing FDA-approved rheumatoid arthritis drug called tofacitinib citrate (brand name Xeljanz, manufactured by Pfizer).  The photos they presented are quite extraordinary (also see study link at the end of this post):

Source: The Society for Investigative Dermatology and Yale University.  Before and 8 months after photos.

Besides curing this person’s hair loss, the drug also significantly improved his psoriasis. Dr. Brett King and his wife Dr. Brittany Craiglow (the two scientists leading this experiment), credited Dr. Angela Christiano‘s earlier work (in which tofacitinib as well as ruxolitinib reversed alopecia areata in mice) as inspiring them to try this experiment in one of their human patients.  They now hope to start larger clinical trials.

to be particularly effective at dealing with this inflammation.  It would be quite something if tofacitinib also helped people like us who are suffering from androgenic alopecia.

Update: CNN also now published this story, with a word of caution from George Cotsarelis regarding the side effects of tofacitinib, his opinion that there is no immune system component to androgenic alopecia, as well as more details about the actual patient (see photo below). 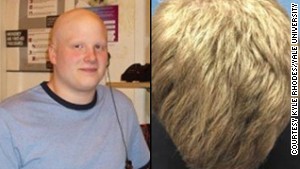 Update: Interesting update from Australian newspaper where Dr. King says he is getting 200-300 e-mails a day about this.