The latest trial photos are pretty amazing. One of the best ones: 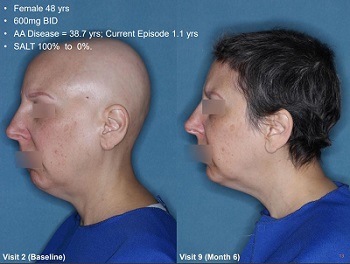 — I covered Dr. Lu Le in detail in May of last year due to his team’s groundbreaking discovery related to Krox20 and its impact on hair growth and hair pigmentation. In a new video interview Mr. Le says:

“It will not be tomorrow. It is in the realm of possibility. We are working really hard in the lab to make it happen.”

— For those of you in the US, this is the traditional March Madness month of playoffs in college basketball. A great excuse to frequent and support your local pubs. One of the most discussed teams so far this year has been Providence (unfortunately they were eliminated today). As is often the case in sports, Providence coach Ed Cooley is a bigger attention grabber than the team’s players. The most admirable thing abut Mr. Cooley is that despite suffering from alopecia areata (i.e., patchy hair loss) for years, he does not care and never discusses the subject. In the above image from a game earlier in the week, he is wearing a towel because he ripped his pants after a fit of exuberance and decided to cover the tear up rather than waste precious game time going to the changing room. Thankfully, he never covers up his patchy hair loss.

— I am not going to write yet another post on Aclaris Therapeutics as requested by several people. However, it is worth checking out blog reader “Malcolm”‘s useful comments in the last post based on Aclaris’ latest investor conference presentation (which can be listened to via the company’s website and includes attached slides). The company is definitely on schedule to finish Phase 2 trials by mid-2019 as announced a few weeks ago and covered on this blog. Also, Aclaris was granted yet another new patent covering the use of JAK inhibitors to treat hair loss disorders, including androgenetic alopecia (which most of us care about the most). Patent details here.

— In 2016, I wrote a post in relation to umbilical cord Wharton’s jelly-derived mesenchymal stem cells (WJMSCs) and hair regeneration. I had forgotten about the subject till I read a new article (h/t “Paul Pheonix”) about South Korea based Medipost being granted a domestic patent related to “stem cell culture fluids preventing hair loss”. It seems like these stem cells will be derived from umbilical cord blood.

— Apparently Monat sold $200 million worth of hair care products in 2017 through multi-level marketing. However, now the company is faced with mounting class-action lawsuits. Complaints range from an increase in hair loss to major scalp irritation to adverse skin reactions.

— Another interesting article on PolarityTE.

— Will we EVER cure baldness?

— Carboxytherapy may be useful for alopecia areata treatment. Maybe also minor improvements in androgenetic alopecia patients when used as an adjuvant therapy. I am skeptical.

— Fractional non-ablative laser-assisted delivery of topical finasteride and various growth factors leads to improvement in male and female pattern hair loss. I did not try to find the entire study and see if results are superior to using plain old oral finasteride 0.5mg per day.