For the second time in just two months, the global media has gone beserk over photos that show complete reversal of alopecia areata. This time via Ruxolitinib. The first time was two months ago in one of Dr. Brett King’s patients via the rheumatoid arthritis drug tofacitinib.

This time, it is via the bone marrow cancer drug ruxolitinib (approved for sale in the US and EU under brand names Jakafi and Jakavi). These current results are even more significant because:

The current findings were released in the online edition of Nature Medicine yesterday.  All three patients saw excellent results within 4-5 months after taking the twice a day pill, and no adverse side effects were reported.

One of the patient’s images released by Columbia University: 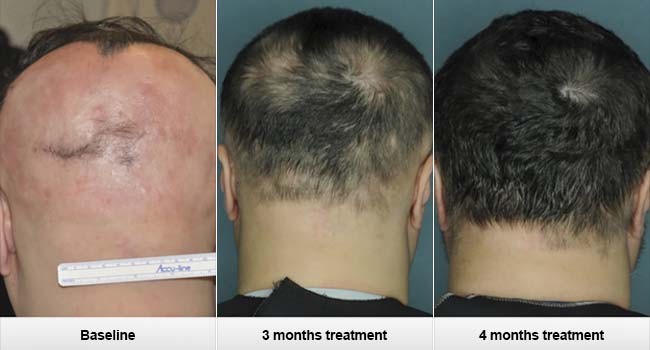 Just as I said two months ago when the tofactinib results came out, these results are yet gain unproven to work on the majority of balding people (who suffer from androgenic alopecia rather than alopecia areata). However, no decisive study as yet has been undertaken that examines the impact of  tofactinib or ruxolitinb on people with androgenic alopecia, so the case is far from closed.  I think that there is a good chance of there being an inflammatory immune system attack component to androgenic alopecia for many people, especially those who have significant itching and dandruff associated with their hair loss.

These drugs are expensive, and potential side effects are far more serious than with a drug such as Propecia, so doctors are reluctant to conduct these studies for what they feel is a cosmetic problem. However it is only a matter of time (probably months rather than years in my opinion) before small-scale studies will be undertaken on all balding people.

Partly due to this development, Mark Blake of The Trichological Society of the UK said the following yesterday:

“It is a matter of time before we find a cure for male pattern baldness as well as alopecia.  We know so much more about hair today and how it grows. We would like to think a cure could come within five years, definitely 10.”