Update: September 15, 2020 — For the past week, there has been a lot of online discussion about Replicel (Canada)’s collapsing stock price. REPCF is at 10 cents per share as of today, down from 30 cents just 6 months ago. A few days ago, Replicel’s Twitter account posted a comment that garnered a number of responses. My favorite interaction came today: 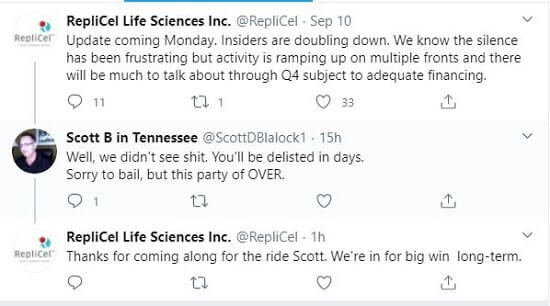 For several years, I have assumed that Replicel’s technology will only come to fruition if Shiseido decides to go through with it. The two semi-partners have had an ongoing dispute related to rights and clinical trials for several years. Shiseido is a cosmetics behemoth that is 100s of times as large as Replicel.

“The disagreement regarding the status of the agreement between Shiseido and RepliCel remains unresolved, but is not the subject of any litigation or arbitration. RepliCel maintains the Agreement remains intact and is communicating with Shiseido its expectation that (a) they deliver to RepliCel the full clinical data set from the recently completed study of RCH-01 in Japan and (b) confirm that their license agreement remains intact without breach. RepliCel reserves the right to take the position that Shiseido’s failure to deliver the clinical data from the recently completed clinical study in Shiseido’s Territory constitutes a material breach of contract which, failing a cure, will warrant RepliCel’s termination of the agreement.”

Not very encouraging. It should be noted, however, that Shiseido has its own Japanese scientists and researchers that have been working on hair loss treatments for decades. I have written many posts on this company since this blog started. Hopefully, Shiseido can still produce a great treatment for androgenetic alopecia, even if unable to use Replicel’s technology. And vice versa of course.

Replicel also stated the following in its update:

“RepliCel will begin preparations for phase 2 human clinical trials of this product outside of Asia (Shiseido’s licensed territory).”

The company is in early stage discussions with potential partners outside of Asia. It seems like Replicel will always need to look for funding at each stage of trials. CEO Lee Buckler tends to post regular updates on Twitter regarding new partnerships.

Replicel just published a slightly encouraging update on its RCH-01 product for hair loss. Well known dermatologist Dr. Jerry Shapiro has high praise for the recent Shiseido trial in Japan. He makes an astute point that most of the patients in the trial were at advanced stages of hair loss. This makes the results even more encouraging for those with recent hair loss. For transparency, the update does mention that Dr. Shapiro was a founding shareholder of Replicel.

The autologous cell-based therapy with dermal sheath cup cells that was used in the Shiseido study is the same product that RepliCel refers to as RCH-01:

Shiseido has licensed the co-development and commercial rights in Asia. RepliCel maintains the complete and unrestricted rights to this product outside of Asia.

Also of interest and something that I missed before: the Shiseido trial proved that the RCH-01 dermal sheath cup cell product can be used after cryopreservation and thawing.

Replicel updated its Twitter feed. It seems like the latest Shiseido trials used Replicel’s RCH-01 technology. A bit strange that Shiseido does not mention Replicel in its latest communications. Perhaps indicating that the two companies’ partnership issues are not yet close to being resolved.

Yesterday, Replicel also got good news from the Japanese regulatory agency PMDA. This was in regards to the issuance of several non-hair loss product related patents. And Replicel got a final consultation go-ahead today regarding the company’s skin and tendon regeneration products.

Replicel’s stock price is even more volatile than usual this week. It dropped 33 percent on Monday. Then increased 71 percent on Tuesday. Down 10 percent so far today.

For those who are in the finance sector, why has Replicel’s stock price declined so drastically and continuously during the past five years? Earlier today, the company made yet another positive press release. This time regarding its YOFOTO licensee in China and its decent growth prospects.

This comes on top of the two announcements that they already made earlier this month. If any of this blog’s readers is investing in REPCF stock, please update us regularly on any developments. Including insider transactions, earnings announcements, P/E ratios and more.