Update: Also see Cosmo Pharma’s new page on Breezula. The company took over majority ownership of Cassiopea in December 2021 after being a part-owner for years (see bottom of this post).

Update: August 27, 2020 — Cassiopea’s Winlevi topical androgen receptor inhibitor has just been approved as an acne treatment by the US FDA. It is the first acne treatment with a new mechanism of action to be approved in 40 years. The key ingredient (clascoterone cream 1%) is the same as in the keenly awaited hair loss product Breezula. The latter will have a higher dosage. 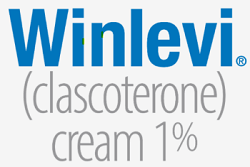 Dermatologists have said targeting androgen hormonal activity in the skin is ‘the holy grail’ of acne treatment for both males and females.

I expect Breezula will not come to the market till 2023, assuming it gets final approval. However, some people plan to use Winlevi on the scalp, even though this is not recommended by the manufacturer.

How things can change in just a few weeks. Breezula Phase 3 trials have now been delayed till 4th quarter 2020 or 1st quarter 2021. All due to COVID-19 (Coronavirus), which has hit Italy particularly hard. More information can be found in Cassiopea’s 2019 Annual Report which was released today.

The Clascoterone female pattern hair loss Phase 2 trials are on track to finish enrollment in 2Q 2020. Trials should be completed by year-end 2020. However, delays are still possible depending on progression and recurrence of the current pandemic.

Quote from the accompanying pdf:

Nevertheless, Cassiopea is still planning to  release its Winlevi acne cream product by the end of this year.

I have covered Italian company Cassiopea since 2014 (when it was called Cosmo Pharmaceuticals). The company is developing a topical anti-androgen hair loss product named Breezula (originally called CB-03-01). The chemical name for this product is Clascoterone. Note that Cosmo Pharma still owns 45 percent of Cassiopea.

Breezula will be available for both men and women. Several of my well known physician contacts in the hair loss world have told me great things about this product. Their feedback is based on what they saw at conferences or heard from colleagues.

The presentation of the results is confusing, detailed, full of acronyms and somewhat open to interpretation. Note that “BID” in there stands for “twice per day” after conversion from Latin. Hopefully they release before and after photos at some point.

Also note that the previous 6-month interim report had 375 subjects, and the 12-month report has 344 subjects. The trial was conducted in Germany.

My gut feeling is that Breezula will be at least as effective as Finasteride and Minoxidil.

Some key points from the above linked article from Cassiopea:

In the past, I used to often state that perhaps an initial cure for hair loss would entail the usage of a cocktail of products. Each working via different mechanisms and chemical or biological reactions.

It is looking likely that Breezula will be one of the main products in this cocktail.

Note that Clascoterone 1% cream to treat acne will be released by Cassiopea before Breezula. The acne product is called Winlevi.

In 2015, the Italian company (Cosmo Pharmaceuticals) that was compounding CB-03-01 changed the product’s name to the unusual Breezula. Moreover, Cosmo itself was renamed as Cassiopea. I wrote about those developments here.

For us hair loss sufferers, pages 18-22 summarizing Breezula’s Phase 2 Proof of Concept (PoC) results is the most important section.

To summarize in brief:

I was pleased to see the results. Overall, Breezula seems as good as Minoxidil, and since the latter is not an anti-androgen, we can use both products topically on our scalp for two separate positive effects. Perhaps we can also add topical Bimatoprost and topical Finasteride to that combo later this year, and then we would have a quartet of topical products, each tackling a different mechanism of balding.

Of course Breezula is still years from release (even if we assume they can speed up phase 3 trials like is the case in Japan, with newer regulations), but some people on hair loss forums are purchasing it illegally or even making it at home. An even more optimistic scenario is the addition of Samumed’s topical SM04554 to the mix whenever that comes out. It would be funny if in 2020, I started applying a quintet of topical products to my scalp and then suddenly a simple cure for hair loss came out that made all those topical products obsolete.

For younger people who have only been balding for a few years or less, such incremental developments are probably not too exciting. For those of us who have been following the hair loss industry for many more years, it is very pleasing to finally see new products arriving. It is ridiculous that there have only ever been two products officially FDA approved to tackle hair loss — 1) Finasteride and 2) Minoxidil.

***Note that on page 8 of the PowerPoint presentation they have labeled CB-03-01 as “Winlevi” and CB-03-11 as “Breezula”. Winlevi (for acne) and Breezula (for hair loss) contain the same key antiandrogen ingredient (a steroid belonging to the family of cortexolone derivatives), but in different formulations.