For those of you who are not in the US, Stephen Miller is officially a senior advisor to President Donald Trump. In reality, Mr. Miller is among the 5-10 most influential people in the Trump administration. 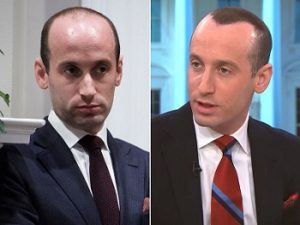 A few days ago, Stephen Miller made a much talked about TV appearance on “Face the Nation”. Lo and behold, it looked like he grew new hair. Or, more accurately, he grew a shadow-like semblance of new hair.

Many online newspapers and TV shows in the US made fun of his new look and suggested it was spray-on hair or painted on hair. Among the comedians who panned Mr. Miller included Stephen Colbert and Trevor Noah.

Mr. Miller knows that he is always in the public eye. He is also not strapped for cash by any means. So I do not understand why he could not find anything better (e.g., scalp micropigmentation) than this paint job. I liked this quote from the Washington Post:

“Here was a man who apparently craved more hair. And in his pursuit of it, he went on national television and did the one thing that would draw blatant attention to his baldness.”

Update: Mr. Miller ditched the spray-on hair in an appearance on CNN yesterday.