— Apparently, there is a small subgroup of people who suffer from hair loss due to a condition called hypohidrotic ectodermal dysplasia (HED), which also adversely impacts nails, teeth and sweat glands. While studying this condition, the well known Dr. Sarah Millar and her team at the University of Pennsylvania recently found that “lower levels of Wnt10A may contribute to male pattern baldness in some individuals”. Later, they go on to state that “small molecule drugs that activate the beta-catenin pathway downstream of Wnt10A could potentially be used to treat hair thinning and palm and sole skin defects” in some patients suffering from male pattern hair loss. I have covered Wnt signaling and various associated proteins and genes (especially Wnt10b) a number of time on this blog in the past when relevant to hair growth, but it seems like this is the first post that has covered Wnt10a.

— Someone from the Netherlands emailed me yesterday with an interesting new story on a well known Dutch news site about an American guy named Darren Moore who is testing FOXO4-DR to regrow his hair. This self-experimenter’s website with frequent updates is here and he also has his before and after scalp photos on there. For more about the FOXO4 peptide and its killing of senescent cells, see my recent post on that subject. The Netherlands based researcher (Dr. Peter de Keizer) who did that groundbreaking work has warned people about the above experiment and its possible dangers in the Dutch newspaper article that I linked to at the beginning of this paragraph.

Besides the health ramifications, I am obviously very skeptical of one-off anecdotal reports, even though I do mention them if interesting. Note that Mr. Moore’s site has two links from where to purchase FOX-O4 from, but I would not recommend getting the product. It is extremely expensive and potentially highly dangerous as elaborated by Dr. Keizer (and worth repeating again). I would also like to first make sure that Mr. Moore is in no way affiliated with the websites that sell this product before taking him more seriously. Having said all that, I am now probably going to eagerly anticipate his diary updates over the next several months:-) I like that he posted a photo of himself with Liz Parrish, another self-experimenter that I have covered on this blog several times before.

— Samumed continues to garner great publicity. They must surely be the most successful hair loss cure focused company of all time when it comes to getting media attention? Their big coup came last year via a cover page on Forbes magazine with some great photos such as the below inside: 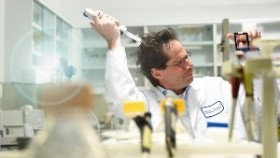 — Like last year, Aclaris Therapeutics is presenting at various investor conferences and lets all of us see their slides and listen to their audio after registration. This time I have not listened to any live or recorded audio as yet (I waited for 30 mins on one day, but it never started at the announced time). For those who are patient, it is always worth hearing the audio out till the end, when attendees often get to ask questions. In their latest slides, Aclaris still maintains that are doing pre-clinical work related to topical JAK inhibitors for androgenetic alopecia. No announcements on when they will start phase 1 trials as yet.

— Baldness, how close are we to a cure? Not a bad effort, since most such articles are highly inaccurate and badly researched. Nevertheless, the author does not even mention the leading prospects for a cure or treatment such as Follica, Histogen, Replicel/Shiseido, Samumed and Tsuji.

— A drug that creates a real sun-tan (and subsequently, protects against skin cancer, rates of which have been rising rapidly).

— 3-person babies for older women having trouble getting pregnant.

— Progress in the cure for multiple sclerosis, a very debilitating auto-immune condition.