For a long time, I have had a post on the back burner discussing how people with hair loss are more likely to suffer from a number of major health problems. For a blog that is generally highly optimistic, I was (in a twisted sense) looking forward to finally writing an entirely negative post so as to please the 1-2 percent of regular readers who only seem to want to see negativity and pessimism in everything. I do try to make everyone who visits this blog feel engaged, including those who seem to genuinely get their daily highs from bad news (or not sufficiently “good enough good news”) and subsequent venting.

Today’s big news of the day (see further below) finally pushed me into finalizing and publishing this pessimistic post. However, I ended up deciding to only focus on heart disease or else the post became way too lengthy. Perhaps I will discuss the other medical afflictions that correlate positively with male pattern hair loss in Christmas?

Being a smart aleck aside, the main reason for writing this post is to encourage the male readers of this blog to get a heart checkup and try to keep key risk factors such as blood pressure, LDL cholesterol, glucose levels and triglycerides in check.

Over the years there have been a number of studies from around the world (e.g., this one from Japan in 2013) that have concluded that men who suffer from heart disease are also much more likely to suffer from male pattern hair loss. Today comes news of yet another such study, this time examining 2,060 young men below the age of 40 in India (with the study undertaken by the European Society of Cardiology). 790 of the study participants suffered from coronary artery disease (CAD), also known as heart disease. BBC and various other major networks have covered this important development.

It seems like testosterone and/or dihydrotestosterone impact both male hair quality and male heart health negatively in those with the relevant bad genes (with inflammation also involved in both conditions). It does not seem like women have this problem, probably due to their producing far less amounts of male hormones (plus the heart protective effects of estrogen in their younger years).

I should, however, note that my 98 year old grandmother still has at least 75 percent of her scalp hair pigmented and absolutely no signs of heart disease. Perhaps when they do such a study on women, they might also find similar correlations, albeit not as strong as in men?

Earlier age hair loss and hair graying are a sign of overall rapid body ageing in some (but definitely far from all) people. In the latest BBC article that I linked to above, one of the scientists quoted suggests that DNA damage from ageing was a potential reason for early onset hair loss, early onset hair graying and early onset heart disease. Of course there are many people who go bald or grey very early and live to be over a 100 with no signs of heart disease…probably because they have certain genetic protections (e.g., high HDL “good” cholesterol levels) towards heart disease.

Celebrities with Premature Graying or Balding

Whenever I think of prematurely graying celebrities, the first name that comes to my mind is CNN’s Anderson Cooper, who went grey in his 30s, and entirely white in his 40s. He has mentioned in a number of interviews about how he misses his darker brown hair. 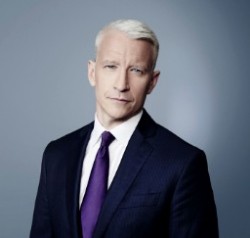 Mr. Cooper is currently 50 years old and seems extremely healthy. However, while researching this post, I found out that Mr. Cooper’s father died at 50…from heart disease. I wonder if the father also had grey hair at the time of his death? Hopefully Mr. Cooper is keeping his blood pressure, cholesterol, glucose and triglyceride levels in check.

Also of note, Patrick Stewart (a hero for many balding men), is still going strong at the age of 77 despite going bald at 19. Something he describes as traumatic in this interview.