I first covered RiverTown Therapeutics and its RT1640 hair loss product briefly in June 2016. My opinion of this company at the time can only be described as being highly skeptical.

This changed slightly in December 2016, when I wrote a post on Cyclosporine and hair growth. In that post, I discussed RiverTown’s RT1640 in much more detail. This product consists of three small molecule drugs that each work via different pathways and mechanisms:

Note that RT1640 is equally effective in men and women. RiverTown’s science page has some other items of interest.

Last month, The New Yorker magazine ran a cover story about the pending arrival of a cure for hair loss. To my huge surprise, they gave the most amount of coverage to RiverTown Therapeutics and its co-founder Dr. David Weinstein. Of the large number of  companies working on a cure for hair loss, I would definitely not put RiverTown in my top 5. Nevertheless, I now do take this company much more seriously than I did in the past.

Moreover, RiverTown is one of the main companies that will be featured in a soon-to-publish article on future hair loss treatments from NewBeauty magazine. In that article, Dr. Weinstein claims that he is hopeful that RT1640 will be available in 2022 via prescription. Both as a topical lotion scalp hair loss product, and a cream eyebrow hair loss product.

I therefore finally contacted Dr. Weinstein about his RT1640 product. He was more than happy to respond to me, and sent the below photos of his own before and after RT1640 scalp hair. The second photo was in a pdf document and lost some quality after extraction. I may try to get a better version.

Dr. Weinstein told me that: 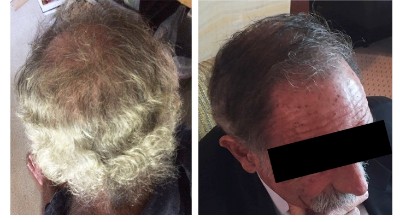 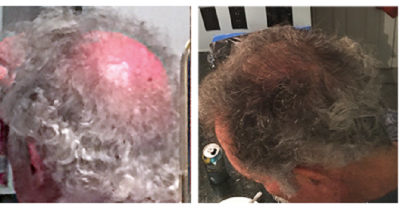 During the past several years, the single biggest breakthrough in hair loss treatments has been in the form of Janus Kinase (JAK) inhibitors curing alopecia areata (AA), alopecia totalis and alopecia universalis in most test patients. You can find numerous posts on that subject on this blog if you browse through the categories menu.

While JAK inhibitors seem to be close to a cure for a majority of patients suffering from alopecia areate (as well as from many other autoimmune related disorders such as vitiligo,  psoriasis and rheumatoid arthritis), their effect on patients with androgenetic alopecia (aka male pattern hair loss, which is by far and away the dominant variety of hair loss in humans) is unproven and controversial to put it mildly. A US based company named Aclaris Therapeutics (based on the work of Dr. Angela Christiano) has claimed that there is a good chance that specialized covalently bound topical JAK inhibitors will cure androgenetic alopecia (AGA) in many patients (oral JAK inhibitors do not work for AGA but do work for AA). The implication is that male pattern hair loss might have a significant autoimmune component to it, a conclusion that it seems is not supported by many hair loss researchers. It is also possible that topical JAK inhibitors could be helping hair growth via a totally different mechanism unrelated to the immune system.

Cyclosporine A and Hair Growth

Some time ago, I mentioned a study that showed oral cyclosporine A (also referred to as ciclosporin A or as CyA) to benefit scalp hair growth in some men with androgenetic alopecia. I thought it significant that well before JAK inhibitors came on to the scene, there was already a drug in the form of cyclosporine that targeted the immune system and that seemed to benefit scalp hair growth in some patients. However, several bloggers mentioned that topical cyclosporine experiments by some hair loss sufferers did not seem to lead to any decent results insofar as scalp hair regrowth goes. Moreover, the effect of JAK inhibitors versus that of cyclosporine is very different (more on that further below), and the past studies linking cyclosporine and hair growth are somewhat ambiguous (more on that further below). I therefore decided to relegate cyclosporine to the backburner for a future post and forgot about it until….

RiverTown Therapeutics and their Cyclosporine Product

The biggest news in the hair loss world this month has been RiverTown Therapeutics’ new website. I have generally not been too keen about this company even though I have mentioned them several times in my blog posts this year.

My two biggest reasons for being pessimistic about RiverTown are the facts that:

Adding to my skepticism about RiverTown are small details such as its actual home page still saying “under construction” as of today, and the CEO’s Linkedin profile not even having RiverTown listed in there (I thought it was there in the past?).

Having said that, I was pleased to learn that the respected hair loss researchers Dr. Elaine Fuchs and Dr. Maria Hordinsky (the former has been mentioned on this blog many times before) are both on RiverTown’s scientific advisory board. Moreover, RiverTown’s CEO David Weinstein was previously associated with a company named GliaMed, and they had a product called GM1485 that never came to market, but that supposedly (in animals) promoted “the regeneration of all components of the skin after injury, including nerves, hair follicles, blood vessels, dermis and epidermis with minimal scarring”. Encouraging.

Hopefully the fact that last week the US House of Representative overwhelmingly supported the passage of the 21st Century Cures Act will help RiverTown and other companies in the hair loss world bring forth their products to market significantly faster, without having to move to Japan.

In any event, getting back to the subject matter of this post, the reason I mention RiverTown is because the new website clarifies that the company’s RT1640 hair loss product contains three ingredients, one of which is cyclosporine A:

Cyclosporine A and Hair Loss Studies from the Past

So now I had to look up all the past studies that mention Cyclosporine and hair in the same page. Below is a chronological list of the most important such studies, with my notes in blue.

Cyclosporine A Versus JAK inhibitors

While cyclosporine A and JAK inhibitors both have immunosupressive properties, their mechanism of action is different.

According to the earlier mentioned Japanese study, cyclosporine A inhibits T-cell activation by “interfering with the production of interleukin-2 (IL-2) by inhibiting IL-2 gene expression, probably through the inhibition of calcineurin, a Ca2+/calmodulin-dependent phosphatase”. A bit difficult but not impossible to understand. Cyclosporine is used for a number of inflammatory skin conditions, especially psoriasis.

JAK inhibitors are a type of medication that inhibit the activity of one or more of the Janus kinase family of enzymes (JAK1, JAK2, JAK3, TYK2). In the process, they interfere with the critical JAK-STAT signaling pathway. Aclaris is working on a  topical covalently binding, highly selective JAK3 inhibitor to cure AGA.

I hope the five or so scientifically highly astute commentators that we have had on this blog to date can further compare and discuss JAK inhibitors versus CsA, since my knowledge in this area is very limited.

Over the years, I have read numerous online forum posts from people stating that when they started losing their hair, they also started getting a lot of scalp itching (largely in the same areas where they were also experiencing hair loss). I have witnessed the exact same phenomenon on my own scalp and use Nizoral to tackle the problem whenever it arises.