I originally wrote this post two years ago, but have updated it due to recent news on Minoxidil application on beards becoming trendy. Make sure to also read my post on how Minoxidil works.

We rarely get to see Minoxidil’s full impact upon scalp hair growth just from photos. This is due to our dense and long scalp hair making any changes difficult to gauge. Moreover, people concurrently taking other hair growth products such as Finasteride, which might be causing most of the new scalp hair growth.

However, the effect of Minoxidil (brand name Rogaine) is much more evident on sparse beard hair that turns dense upon application of Minoxidil.

Does Minoxidil work to grow beard hair? Yes, according to some studies. Moreover, many of the before and after photos in the below links are pretty amazing.

This week, a number of news articles covered the growing use of Minoxidil by young men with spare beards. The before and after Minoxidil beard hair growth photos are quite astounding in this article. More photo evidence here.

On January 21, 2003, a 20 year old man with the online name “Curi0usGeorge” started a US based beard forum thread about growing his sparse beard via applying extra strength 5% Minoxidil (widely known as Rogaine) onto his face rather onto his scalp.

In early March of that same year, he stopped his experiment, largely because he started getting excess body hair as a side effect. While he also got more facial hair from the Minoxidil, it was not in a pattern and density that truly satisfied him. Also see my 2013 post on Rogaine Beard Experiment.

Little did “Curio0usGeorge” realize what he had started in 2003. His forum thread grew to 615 pages in length with 20 comments per page. Finally, towards the end of 2016, it was unfortunately closed by the moderators after 15 years of postings.

Prior to 2003, while many others on the web had discussed or experimented with using Minoxidil to grow facial hair, it was this mega-thread that became the go to place on the internet for men trying to grow denser beards using Rogaine.

Myself and numerous other men losing hair have the opposite problem and would prefer a much less noticeable beard and slower facial hair growth. Nevertheless, I still thoroughly enjoyed going through 100 or so pages of the above thread some years ago. I was amazed at some of the before and after photos and transformations.

I never forgot those visuals, and I have posted about the above thread at least briefly in passing several times in the past. It clearly shows that Minoxidil can grow new beard hair where there was none before, and not just make existing hair stronger. Or, to be more precise, it can convert vellus invisible-to-the-eye unpigmented hair into terminal pigmented hair.

While I have never enjoyed using Minoxidil on my scalp, the numerous before and after photos in the above mentioned thread (as well as via the before and after finasteride and minoxidil testimonials in here) have convinced me to keep using Rogaine to this day (albeit just several times a week in order to minimize side effects).

Growing Beards with Minoxidil in Indonesia

The reason I wrote this post and remembered the above mentioned mega-thread is because earlier this week, the Wall Street Journal published a very interesting related article related to Minoxidil and beard growth on the front page. 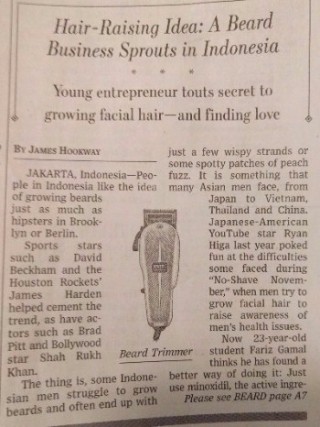 If you cannot access the WSJ online edition, I have pasted an image on the left side of the first half of the story. Apparently, an entrepreneur in Indonesia by the name of Fariz Gamal has started a business to help men grow beards via just using Minoxidil.

Like most Asian men, Indonesian men on average have much less facial hair in comparison to the average caucasian men. It is now becoming fashionable and trendy to grow at least modestly thick beards (especially in a Muslim majority country such as Indonesia).

When I did more research on Mr. Gamal, I came across this interesting article from April of this year from a local Indonesian magazine. He mentions that he orders the Kirkland brand of Minoxidil from the US. He claims that “he grew the full beard of his dreams after four months of regularly applying minoxidil to his face”. For social media fans, here is his Instagram page and here is his Youtube channel.

Side effects of using Minoxidil on Beards

It should be noted that prolonged use of Minoxidil on Beards can cause a number of side effects, including:

Moreover, if you stop using the Rogaine on your beard, the new hair will slowly fall out and not regrow.

It should be noted that there are numerous very popular Youtube videos of men growing much thicker beards after using Minoxidil on their faces. However, I find some to be sketchy so did not select any favorites to embed on here for the time being. There are now also countless online forum testimonials with photos from men who have had success with this type of experiment, including on the Minoxidil and beard growth subreddit.

If I had the time, I would try to tally all the success and failure testimonials out there and calculate what percent of men who use Minoxidil on their face see significant new facial hair growth based on all these anecdotal reports (ideally, with photos as evidence).