There have been a number of important developments in the platelet-rich plasma world during the past several months, warranting a new post on the subject.

— In late March, the famous patient advocate Joe Tillman published a very interesting video on his first ever PRP treatment with Dr. Jerry Cooley. Joe told me that he will give us an update on his results in the near future. Below is his first highly instructive video. I like the centrifuge part:

— In the April issue of Dermatologic Surgery, a new favorable study from Spain on PRP treatment for hair loss was published. It seems like no ACell was added into the mix. I did not find the full study via Google Scholar, but the abstract concludes that “PRP showed a positive effect on AGA and could be regarded as an adjuvant therapy for AGA.”

I still do not think that PRP will usually grow brand new hair, as has also been verified by some hair transplant surgeons. However, it can often prevent baldness from progressing as rapidly, and it can without a doubt make existing hair thicker. Why do I say this? Because at this point I have seen favorable studies from way too many countries to dismiss this oftentimes still controversial subject. Make sure to see a list of these studies in my post on how PRP works for hair loss, which I update every couple of years.

— Dr. Jeffry Rapaport has a knack for frequently appearing in various respected US TV shows. The below video (now taken away it seems) is from just a few days ago. Unlike many other US physicians who just go on TV for publicity, I feel like Dr. Rapaport comes across as much more sincere. Moreover, he only charges $500 per PRP treatment. Much more ethical than physicians who often charge over $2,000 for a treatment that is far from guaranteed to work.

— Finally, although not related to hair loss, currently injured NBA MVP Stephen Curry got PRP treatment on his right knee in order to try to speed up recovery. Kobe Bryant did the same thing in the past before his achilles tendon rupture. As more superstar athletes get PRP treatment, it can indirectly benefit hair loss sufferers via more research money flowing into this field.

No matter what your opinion about platelet-rich plasma, it is worth keeping a track of this sector of the hair loss world. Especially when it comes to new studies on the subject. Do make sure to read my comprehensive post titled “does PRP work for hair loss“?

Dr. Greco agreed that PRP sometimes does bring back pigment to hair. I have pasted the contents of his e-mail below. Underneath that are a couple of great before and after photos that he sent me of one of his patients. This person got darker hair from PRP hair treatment. 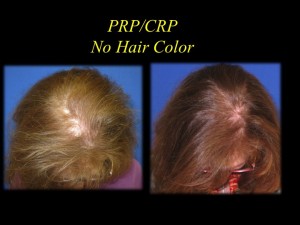 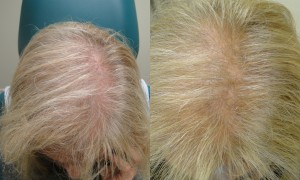 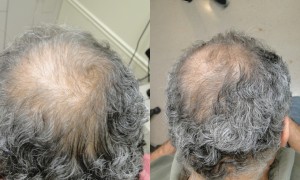 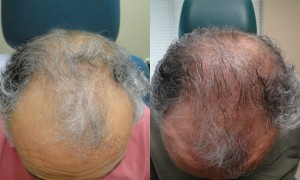