I think that obese men are slightly less likely to be bald than people of lower or normal weight. My guess for this is due to the favorable scalp hair growth effects of extra estrogen and lower testosterone in obese individuals.

When I wrote this post, I ran a poll and only 26 percent of people agreed with my hypothesis. Another 31 percent were unsure. The second half of this post is from 2017 and has those details. The first half is an update with new findings that contradict my hypothesis.

Moreover, a 2014 study from Taiwan concluded that a higher body mass index (BMI) was associated with a greater severity of androgenetic alopecia (AGA). However, in this particular case, the findings only pertained to those who already suffered from AGA. There was no proof that obesity could actually spur the onset of hair loss.

Despite the above new Japanese study, I am still not convinced. The hormone altering modern diet and lifestyle is likely more of an issue in causing rising rates of balding around the world. Rather than  just actual weight gain. But my opinion and guessing does not mean much of course.

Last week, a new study from Germany concluded that short men are more likely to go bald prematurely (i.e., at an earlier age). This was very surprising to me, since I never noticed any strong correlation between height and scalp hair quantity in real life. The same study also alluded to the fact that “white men in particular lose their hair prematurely”. Something I have also observed and mentioned on this blog before. The above study was widely covered by the global media.

On the other hand, one correlation that I have definitely noticed is that men who are obese seem to on average have a at least modestly lesser chance of balding in comparison to: men who are of average weight; or are slightly overweight; or are slightly underweight. For the sake of simplicity, assume that the definition of an obese man (of average height) is someone who is at least 50 lbs overweight.

On hair loss forums, people often talk about changing their diet to a healthier one in order to see if it improves scalp hair. However, if anything, I have seen highly obese people with a terrible junk food and soda filled diet having better hair than those with more regular diets. I hope I am wrong about that observation.

Moreover, when people lose a lot of weight, one frequent complaint seems to be the side effect of hair loss. This might be a temporary shedding (telogen effluvium) problem in most cases.

Obesity’s Impact on Testosterone and Estrogen

If the above inverse correlation between weight and scalp hair quantity is true, the main reason is probably because very fat men tend to have lower levels of testosterone. This would mean they most likely also have lower levels of dihydrotesterone (DHT), the main culprit in male pattern hair loss. An important study from 2008 found that higher waist circumferences were associated with lower testosterone levels.

Update: I had to delete the poll in 2018 due to some plugin issues. The results of the poll are summarized below.

In your daily life, have you noticed that obese men are less likely to go bald in comparison to non-obese men?

I first covered hairy skin regeneration company PolarityTE (PTE) in 2017. I did not update their work for two years as their were some concerns. However, it seems like the company is still active and holds potential. So time for an update.

PolarityTE plans to file for a Biologics License Application (BLA) for SkinTE in the second half of 2021. In the meantime, the company will (temporarily) cease sales of SkinTE and wind down commercial operations.

Note that this issue is related to the US FDA’s recent announcement that enforcement discretion related to 361 HCT/P products will not be extended beyond May 31, 2021. A development that has also adversely impacted the marketing and use of exosomes  in hair loss patients.

Despite a limited team of just eight sales agents, PolarityTE reported record SkinTE sales of $1.73 million in the first quarter of 2021. Per CEO David Seaburg, the company will still try to help physicians who are treating severe wounds in patients through compassionate use programs. Possibility via the FDA’s Expanded Access IND program.

So all in all, it seems like SkinTE is at least a modest success. Future sales will depend on the BLA approval. Note that in May 2021, PolarityTE announced positive results in initial trials of using SkinTE to treat diabetic foot ulcers.

My past posts on skin regeneration company PolarityTE are worth a reread for background information. The only reason I keep covering this Utah-based company is because the new skin they claim to be able to regenerate includes new hair follicles. The company is also led by some highly reputable and experienced scientists.

In the past, PolarityTE even had a photo of a balding man on their site getting treatment on his scalp. Although this photo has since disappeared, we all hope that the company can regrow scalp hair by regrowing scalp skin.

In March, scientists from PolarityTE in collaboration with others published an important new study: In vivo expansion and regeneration of full‐thickness functional skin. The below caught my eye: 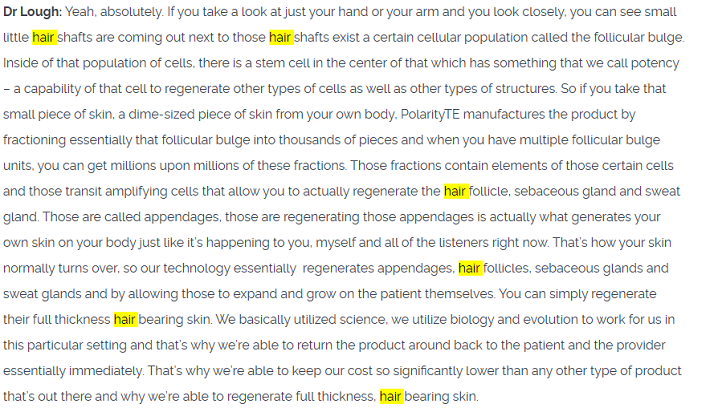 All of this is very encouraging. Skin regeneration is a far greater area of research than hair regeneration, since burn and accident victims can become irreparably disfigured.