If you were to get a hair transplant, would you pick FUE or FUT? Another name for FUT is strip hair transplants. FUE is a more recent hair restoration technology.

What is the Difference Between FUE and FUT?

It has been a while since the last poll.  Today there are two of them, and both are related to hair transplants: the best currently available option to treat hair loss in both men and women. The first poll below can be taken by both men and women. However, the second one is only applicable to men as far as I know. Only two options for each answer.

Please closely read all the options in the below poll before voting. You can only vote once, and cannot edit your vote.

A total of 1756 people responded, with 1,536 picking FUE and 220 picking FUT. Most people clearly seem to prefer FUE versus FUT. 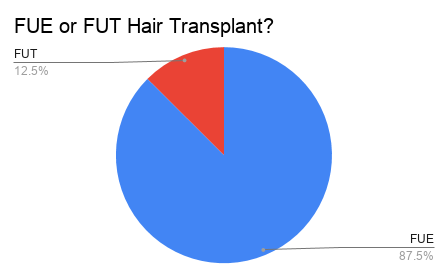 Would you Ever Get a FUE Body Hair Transplant (BHT) ?

A lot of FUE procedures now include some body hair that is moved from the body to the scalp. Such procedures are known as body hair transplants (BHT). Would you get such a surgery?

Update: And in other important news from Japan from this week:

— Pokemon Go was finally launched in Japan, its spiritual homeland.

Without any doubt, there has never been a better year than this one in the hair loss research world. The last four months have been especially fruitful, and I am not even considering a number of newer entrants in the field (just because most seem suspicious or are likely to produce best case results that will be akin to those from Rogaine). Key noteworthy recent developments:

RIKEN and Dr. Tsuji are conducting their research at the Kobe Biomedical Innovation Cluster (KBIC) in Japan in RIKEN’s Integrated Innovation Building.

Today, in yet one more major positive development this year, it was announced that the Shiseido/Replicel team has finally started its delayed 60-person (men and women included) Japanese clinical trials for its autologous cell therapy based RCH-01 product.

While the study will be conducted at two hospitals in Tokyo, the injected product(s) will be manufactured by Shiseido at their SPEC (Cell-Processing and Expansion Center) in KBIC. I discussed this facility in a post in 2014. It is located in the Business Support Center for Biomedical Research Activities (BMA) building in KBIC.

So Shiseido and RIKEN’s respective research and development work will be conducted at buildings within a mile of each other!!

I arrived at this conclusion after analyzing this map (both buildings are on the right side of the railroad).

While doing research on KBIC, I found that it is located on Port Island in the city of Kobe, and Port Island is an artificially constructed island. Would be quite something if humans end up creating new replacement hair follicles on a man-made island.